Elements of the Suit 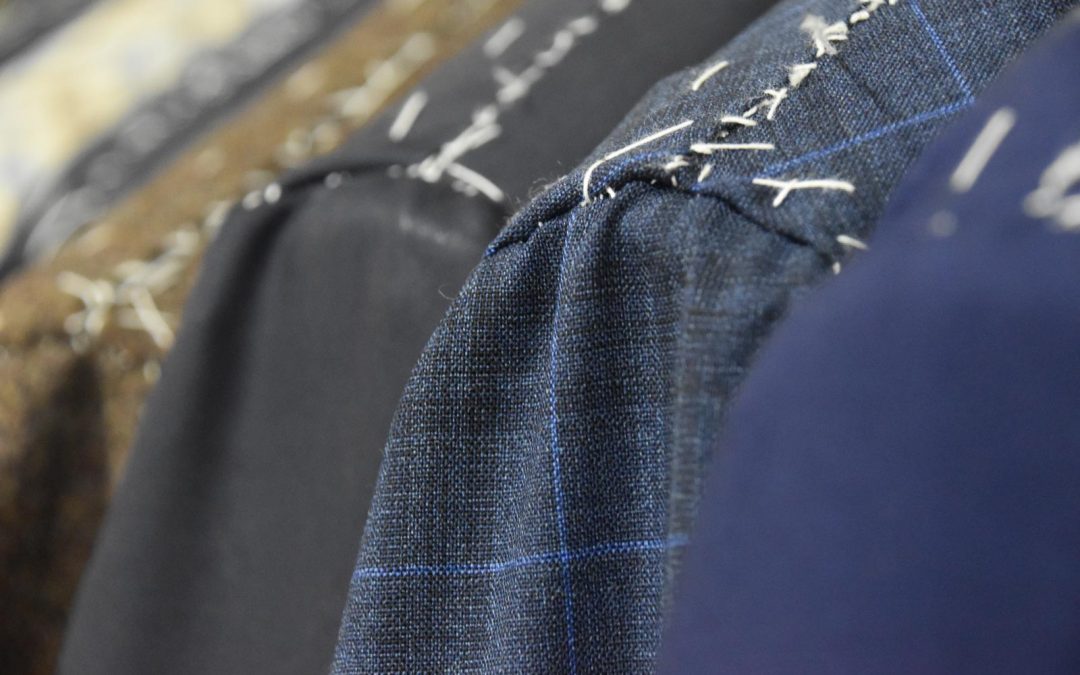 The silhouette of a suit is its outline. Tailored balance created from a canvas fitting allows a balanced silhouette so a jacket need not be buttoned and a garment is not too tight or too loose.

A proper garment is shaped from the neck to the chest and shoulders to drape without wrinkles from tension.

Shape is the essential part of tailoring that often takes hand work from the start.

The two main cuts are:

1) double-breasted suits, a conservative design with two vertical rows of buttons, spanned by a large overlap of the left and right sides.

2) single-breasted suits, in which the sides just meet at the front down a single row of buttons.

The other buttons, placed on the outside edge of the coat breast, are either decorative (non-functional) or functional, allowing the overlap to fasten reversibly, right lapel over left lapel.

To strengthen the fastening, a functional innerbutton, called the jigger, is usually added to parallel fasten the over-lapped layers together from the inside.

The original double-breasted jacket has six buttons, with three to close. This originated from the naval reefer jacket.

The four-button double-breasted jacket that buttons at the lower button is often called the “Kent”, after the man who made it popular— the Duke of Kent.

The term single-breasted refers to a coat, jacket or similar garment having one column of buttons a narrow overlap of fabric. In contrast, a doublebreasted coat has a wider overlap and two parallel rows of buttons.

Single-breasted suit jackets and blazers typically have two or three buttons (jackets with one or four buttons exist, but are not common), and a notch lapel.

However, from the 1930s onwards, peaked lapels, often on a single button jacket, have been variably in fashion, and this is now a classic.

The width of the lapels is one of the most changeable aspects of this jacket, and narrow peak lapels on single-breasted jackets has became popular during the 2000s.

Good tailoring anywhere in the world is characterised by strongly tapered sides and minimal shoulder, whereas often rack suits are padded to reduce labour. More casual suits are characterized by less construction and tailoring, much like the sack suit is a loose American style.

There are 3 ways to make suits.

Ready made and altered “sizes” or pre cut shapes; a convenience that often is expressed over time with wrinkles from poor shaping, leading to distortion.

Made to measure that uses measurements, not shaping, to achieve things like style, lengths and horizontal measurements.

Custom, bespoke or tailoring-designed suit that is cut from an actual personal pattern.

Suits are made in a variety of fabrics most commonly from wool. The two main yarns produce worsteds (where the fibres are combed before spinning) and woollens (where they are not).

These can be woven in a number of ways, producing flannel, tweed, gabardine, and fresco among others. These fabrics all have different weights and feel,

Our fabrics have an S (or Super S) number describing the fineness of the fibres.

Although wool has traditionally been associated with warm, bulky clothing meant for warding off cold weather, advances in making finer and finer fibre have made wool suits acceptable for warmer weather, as fabrics have accordingly become lighter and more supple.

For hot weather, linen is also used, and in North America cotton seersucker is worn. Other materials are used sometimes, such as cashmere. Silk and silk blended with wool are sometimes used. Synthetic materials, while cheap, are very rarely recommended by experts.

Worsted is a type of yarn, the cloth made from this yarn, and a yarn weight category. The name derives from Worstead, a village in the English county of Norfolk.

Worsted cloth is lightweight and has a coarse texture. The weave is usually twill or plain.

Twilled fabrics such as whipcord, gabardine and serge are often made from worsted yarn. Worsted fabric made from wool has a natural recovery, meaning that it is resilient and quickly returns to its natural shape, perfect for the best suits in the world.

Woollen is a type of yarn made from carded wool.

Woollen yarn is soft, light, stretchy, and full of air. It is thus a good insulator. With Woollen yarn the fibres are combed to lie parallel rather than carded, producing a hard, strong yarn.

A woven woollen fabric is one which is subjected to fabric finishing techniques designed to add a directional pile – in that the end consumer can ‘stroke’ the garment in a single direction (shoulder to cuff etc.), such as a casual jacket. This feels like the fibres are directionally arranged.

The worsted processing route is more complex and requires the removal of short fibres and the use of a focused mechanical process to make the individual fibres parallel to each other; thus the yarn formation process is significantly more comprehensive and results in a very sleek yarn which will offer a clean looking woven fabric, such as for suitings.

Flannel may be brushed to create extra softness or remain unbrushed. The brushing process is a mechanical process where a fine metal brush rubs the fabric to create fine fibres from the loosely spun yarns.

Flannel can be woven in either a twill weave or plain weave. The weave is often hidden by napping on one or both sides.

After weaving, it is napped once (the surface of the cloth is raised to give a fussy feel to it). then its bleached, dyed, or otherwise treated, and then napped a second time.

Made in either plain or twill weave and may have a check or herringbone pattern. Subdued, interesting colour effects (heather mixtures) are obtained by twisting together differently coloured woollen strands into a two or three ply yarn.

Harris Tweed is the best know of all Tweeds: A cloth hand-woven by the islanders on the Isles of Harris, Lewis, Uist and Barra in the Outer Hebrides of Scotland, using local wool.

The fibre used to make the fabric is traditionally worsted wool, but may also be cotton, texturised polyester or a blend.

Gabardine is woven as a warp-faced steep or regular twill, with a prominent diagonal rib on the face and a smooth surface on the back.It always has many more warp than weft yarns.

A suit made in Gabardine will typically be very warm as the yarns are so tightly woven together.

An S number on the label of a wool suit, or other tailored wool apparel, indicates the fineness of the wool fibre, but more commonly the cloth reference. A cloth with a super number is considered more often than not the best cloths. Hence our prominent ranges.

Now used Super means pure new wool and can also be used for fabrics made from wool blended with rare fibre (such as mohair, cashmere wool and alpaca), and also with the S numbers for fine cloth state, with precision,the fineness of the wool fibre used in the cloth, as measured in micrometres.

Fibre fineness is one of the factors determining the quality and performance of the cloth.

Most single-breasted suits have two or three buttons, and one or four buttons are unusual.

Placement and style of buttons are critical to the overall impression of height conveyed by the jacket.

The centre or top button will typically line up quite closely with the natural waistline. Double-breasted jackets have only half their outer buttons functional.

The second row is for display only, forcing them to come in pairs. Rare jackets can have as few as two buttons, six buttons are typical, with two to button; the last pair floats above the overlap.

The three buttons down each side may in this case be in a straight line (the ‘keystone’ layout) or more commonly, the top pair is half as far apart again as each pair in the bottom square.

A four-button double-breasted jacket usually buttons in a square.

The layout of the buttons and the shape of the lapel are co-ordinated in order to direct the eyes of an observer. For example, if the buttons are too low, or the lapel roll too pronounced, the eyes are drawndown from the face, and the waist appears larger.

Jacket lapels are the folded flaps of cloth on the front of a jacket or coat, and are most commonly found on formal clothing and suit jackets. Usually they are formed by folding over the front edges of the jacket or coat and sewing them to the collar, an extra piece of fabric around the back of the neck, as shown in the image.

There are three basic forms of lapels: notched, peaked and shawl. Notched lapels, the most common, are usually seen on business suits. Peaked lapels are more formal, and nearly always used on double breasted jackets or coats. Shawl lapels are usually carried by dinner jackets.