The history of braces/suspenders – The Ups & Downs! 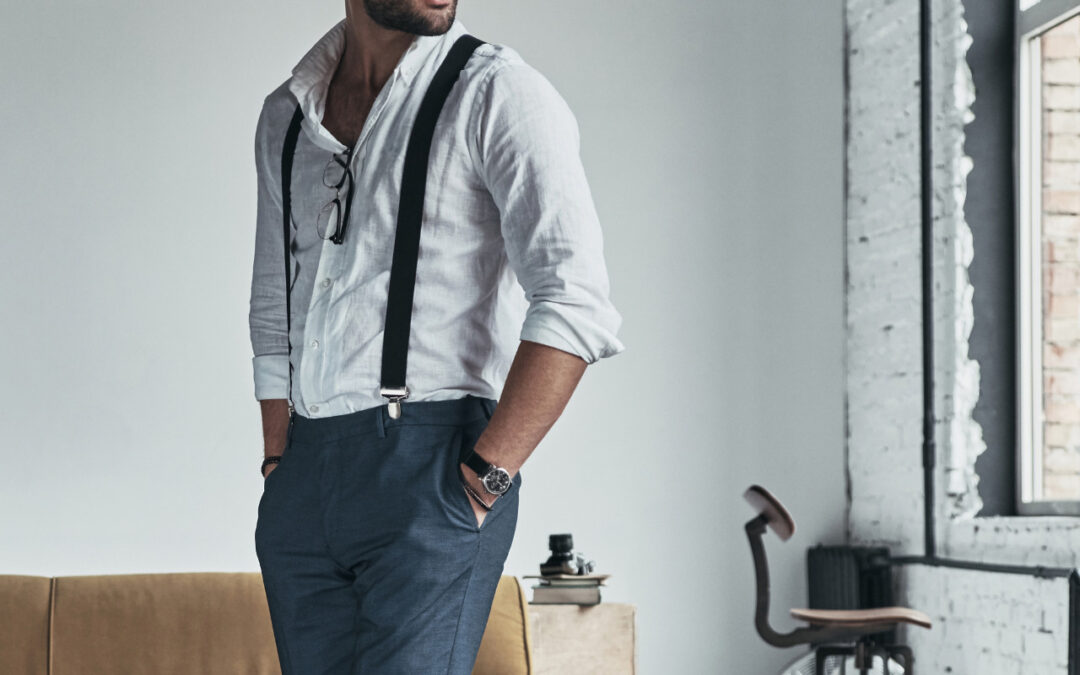 Braces, referred to in the United States as suspenders, have existed in one form or another since the birth of trousers or pants. Braces have performed brilliantly for many years in avoiding the catastrophe of losing ones trousers but they are also a style and fashion statement in modern day use.

Staging more comebacks than Frank Sintra, who was an avid braces wearer, braces have dipped in and out of fashion. The 19th century saw them classified as ‘underwear’ and exposing them was considered a risqué move!!

Even in the early twentieth century it could be seen as distasteful or impolite to wear braces if they were not covered by a vest or some other piece of clothing – exposing them was against the law on Long Island as recently as 1938.

The Decline of braces & suspenders

Oversized Foot Suits were a big hit during the 1940s, meaning that braces/suspenders had to be worn to keep the pants at a desired lower ribcage height. The trend was suddenly cut short at the outbreak of World War II, as this use of cloth was curtailed. At the same time, a great number of military servicemen began wearing belts to support the trousers of their uniforms – a habit which continued when they were demobbed. This spelt danger for the suspender industry. Braces had gone from not being seen, to not being worn.

The 1950’s nearly saw the complete abolition of braces/suspenders when a new breed of Hollywood movie stars, such as Marlon Brando and James Dean, graced the silver screens in denim jeans!! Jeans with belt loops, no need for suspenders!! A whole generation of young men had a fresh vision of glamour… and there wasn’t a pair of braces in sight.

Two new action heroes appeared on our screens in the 1950s, they were British, they drove sports cars, and they didn’t wear denim!! Making their screen debuts in 1962, Roger Moore as the Saint and Sean Connery as James Bond, the impeccably bespoke tailored style, braces included!

Dressing up, rather than down, became fashionable again in the mid sixties the Mod movement had created a renaissance in tailoring, but the style was influenced by sleek Italian design, and sadly, braces didn’t sit comfortably with the look. It is with some irony that, in 1969, when all seemed doomed for the business of braces, salvation arrived in the most unlikely form of the “rebellious teenager” and another British youth subculture – Skinheads. Braces were an essential part of the Skinhead’s outfit, worn on prominent display – possibly as a bold, anarchic statement, breaking down the final vestige of conservative thinking of braces as underwear. In something akin to Superman wearing his briefs on the outside of his trousers, Skinhead style had a fearless air and created fearful looks.

The 1970s saw a shift in the focus of popular culture, from the streets to the dance floor, but no matter how energetically hips were gyrated at the discotheque, the tight-fitting tops of flared trousers needed little support. In any case, the practical, dependable, masculine style of braces would be at odds with satin shirts unbuttoned to the waist. In the 1980’s Wall Street birthed a film portrayal starring Michael Douglas, who won an Academy Award for best actor. The main point here is him being remembered for braces being a prominent part of his wardrobe, and bankers around the world following suit (excuse the intended pun), and braces/suspenders breathing a sigh of relief!

james Bond brings it back with albert thurston braces

Cue 007. A phenomenon that had experienced it’s own mixed fortunes over the years. Just like the braces business, the James Bond franchise needed new life, and they both found it in Daniel Craig. Bond was back. A born military man, as comfortable in polite society as Brummell, he could mix it with motorcycle gangs and scrap with skinheads, survive in a cell full of prison bums and tame any of the wolves on Wall Street. When it came to bankrupting a terrorist financier in a high-stakes poker game, he did so in the coolest manner – wearing a pair of Albert Thurston braces.

Braces/suspenders in the current day are much more of a fashion statement than a way of keeping one’s pants up!! A style statement for the impeccably well dressed!! Ensure the pants are matching the height of your style by ensuring that the fabric has drape and is steeped in quality and style. Huddersfield Textiles has everything one could ever need!! View our ranges here https://shop.huddersfieldtextiles.com/cloth/cloth-bunches/